Communities for a New California Education Fund and Indio Organizing Power have brought Indio residents together to inform a new city map that prioritizes keeping communities of interest whole and providing a more accurate balance of representation. The Indio Residents United map fully complies with Section 2 of the Voting Rights Act (VRA); it includes four VRA districts with over 50% Latino CVAP.

The Indio Residents United map reflects community of interest notes from residents and keeps neighborhoods and communities of interest within the city whole. An outline of specific changes are included below, district by district. 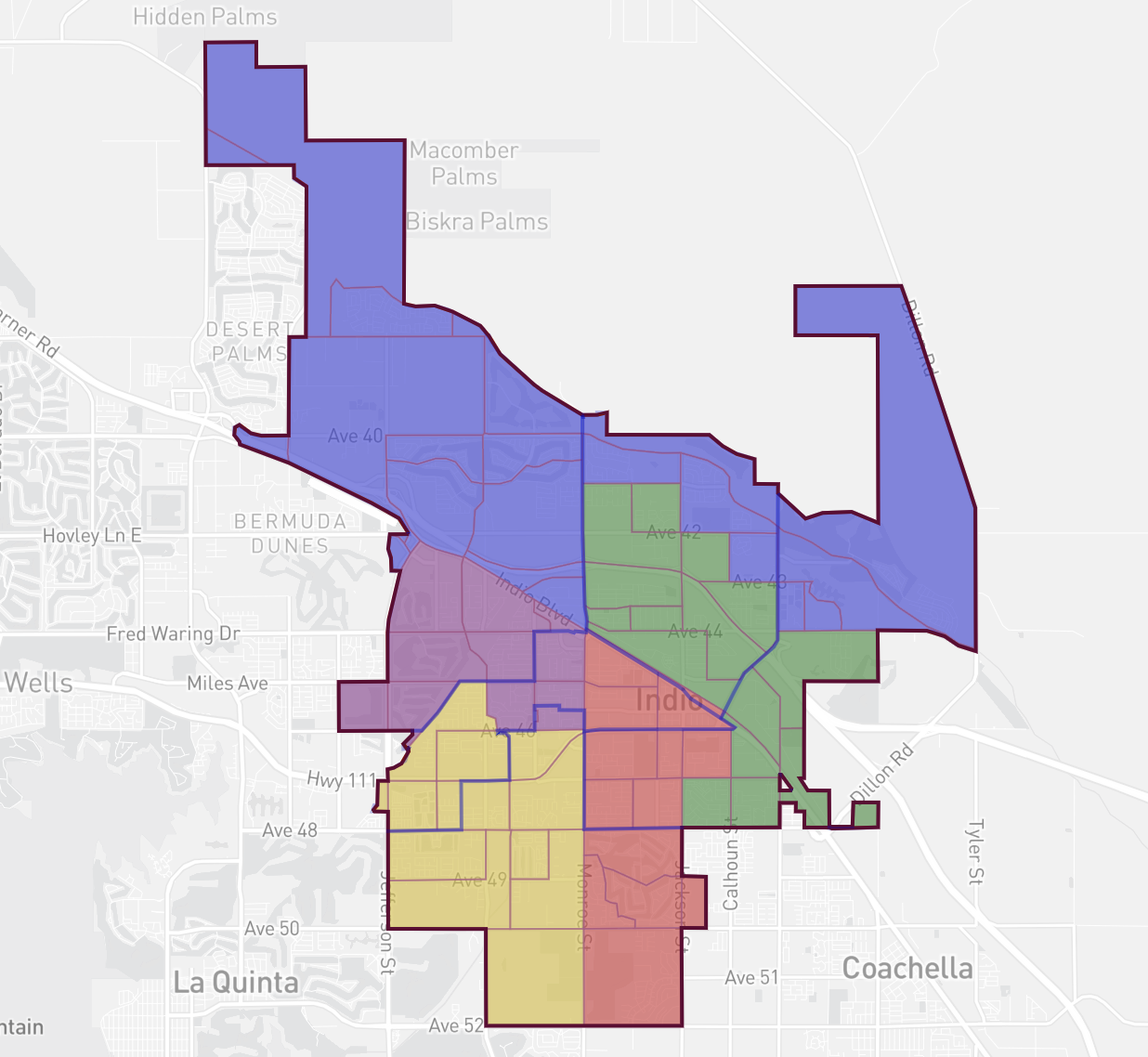 The Indio Residents United map brings together rural areas and residential areas into District 1 that includes higher income and gated communities of interest that are in closer proximity to Interstate 10. These communities have representation through formal HOA structures as well as inter-community communication and host events together. The shared boundary of District 1 and 2 has been moved to Avenue 41 and continues southeast along Avenue 42, Avenue 43, and Avenue 44 to balance each district's population.

District 2 fully brings together all of the “old and new” North Indio including Indio communities along both sides of Interstate 10. District 2's north border begins at Avenue 41 and continues southeast along Avenue 42, Avenue 43, and Avenue 44. District 2 includes an intersection of multiple communities of interest such as Latino, low-to-middle income, multigenerational families. This map ensures District 2 schools, parks, and churches in these areas remain together. These neighborhoods and communities have an economic center, including a range of grocery stores, retail stores, and local businesses that remain in this area. The neighbors in District 2 constantly shop at the Walmart, WinCo and Vallarta shopping centers facilitated by Calhoun Street, Dr. Carreon Boulevard, Golf Center Driveway, and Jackson Street. This map was designed with consideration of the General Plan, Housing Element, and Proposition 68. District 2 is a Voting Rights Act district.

District 3 includes diverse neighborhoods comprising low, middle, and higher income neighborhoods in central Indio. The new boundary of District 1 and 3 follows Avenue 42 and Indio Boulevard. The new boundary of District 3 and 4 follows Monroe Street. The new boundary of District 3 and 5 is Madison Street and Avenue 46. A variety of apartment complexes and single family homes are located along Avenue 46, Hoover Ave, Miles Avenue, and Fred Waring. This district is connected by main streets and side streets that allow circulation through walkability and cycling. Important to this community are the connectedness of the Indio Recreation Community Center, the Teen and Senior Centers. There has been discussion of continuing to connect those centers through recreation and community events. Families that attend Lyndon B. Johnson or John F. Kennedy Elementary Schools later send their children to Indio Middle School, creating a deeper level of connection to the proposed district. District 3 is a Voting Rights Act district.

This district brings together neighborhoods in central and southeast Indio. In this map, District 4 includes more working families and does not split up communities of Interest along HWY 111, Indio Boulevard, Miles Avenue and Jackson Street. A variety of duplexes and apartment complexes are located on both sides of HWY 111 that consist of low-income families. District 4's north border begins at Indio Boulevard. The southern border is extended to Avenue 52. From the westside it runs along Monroe Street and the eastside runs along Jackson Street. District 4 keeps communities of interest together and has a Black CVAP of 6.3%; the highest of all districts. These neighborhoods and communities have an economic center along HWY 111 including a range of grocery stores, retail stores, and local businesses that are kept whole in this area. The network of parks between Miles Avenue Park, Dr. Carreon Park, and South Jackson Park is important to all residents of Indio. This district also keeps many small Latino owned businesses on Miles Avenue, HWY 111, Jackson Street, the Swap Meet, and Avenue 48 together. This map was designed with consideration of the Downtown Specific Plan, the General Plan, the Housing Element, CalEnviro Screen, and Proposition 68. District 4 is a Voting Rights Act district.

District 5 includes both middle and higher-income neighborhoods. District 5 keeps both James Madison Elementary and Indio High School together, continuing to create strong working relationships between both schools. In this map, District 5 includes more working families and does not split up communities of Interest along HWY 111. This district keeps the higher-income communities along Madison and Avenue 49 together. This district allows franchised businesses to remain together along the HWY 111 corridor. District 5 is a Voting Rights Act district.